Participation in a Research Study on Embouchure Dystonia - University of Washington - St. Louis

I don't know why I forgot to post this ages ago! I was flown out to St. Louis on January 3rd, 2018 to participate in a research study on embouchure dystonia conducted at the University of Washington St. Louis, by Aimee Morris and neurologist Dr. Joel Perlmutter.

The Dystonia Coalition team also happened to be there conducting research, so they took blood samples and videos of my playing to archive!

While in St. Louis, I was happy to visit my friend/mentor/horn player Thomas Jostlein who is the associate Principal Horn of the St. Louis Symphony, and speak with another horn player about the subject of embouchure dystonia.

Even though it wasn't a vacation, I really enjoyed the time away from Denver. I really needed the trip away. The photo above is a view from the hotel room. I spent most of the night sitting next to the window, eating an awesome dinner, looking out at the scene of the arch with all the city lights. I listened a podcast interviewing Marty Hackleman who discusses near the end of the interview his recent diagnosis of embouchure dystonia. I also started reading a hefty pile of  books (photo below) I checked out from the library before I left Denver.

I can't tell you how relieving it was to talk to Dr. Perlmutter and ask him all kinds of questions I had, such as why Deep Brain Stimulation (DBS) surgery isn't allowed on musician's with embouchure dystonia in particular in the United States, when it is quickly gaining a reputation for curing musician's with hand dystonia...or even the use of Transcranial Direct Current Stimulation (TMS). Forgive me for not explaining the jargon well or things more thoroughly, as it is sometimes all greek to me as well. He was explaining to me how the brain registers musician's dystonia in both hemispheres and why it is not as easy to target the exact location during surgery as it is when conducting surgery for Essential Tremors which can be pinpointed. It's another reason why the experimental surgery on musicians is not approved in the United States. Most of the research using DBS and/or TMS is being conducted on more life-threatening forms of neurological disorders.

It was relieving to also work with Aimee Morris as she is also a french horn player who has experienced a physical setback in the past; Bell's Palsy. She is passionate about her research, and did a fantastic job of organizing everything from booking my flight, hotel, transportation, itinerary, and meals. Dr. Perlmutter performed neurological tests, and Aimee did the fMRI imaging on my brain, and conducted the playing tests/recordings, and the questionnaire.

Here is an image of my brain I was able to take home with me. Sorry for the blurriness, as I took a picture of it from my phone. It's not often you get to see images of your own brain up close. 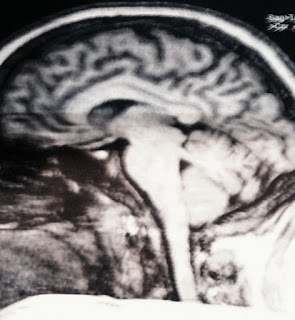 It was a whirlwind day of tests, blood samples, questions, playing, recording, trying to not fall asleep in the fMRI machine for an hour, and video taping, that I can't remember all the details, nor do I understand exactly how all of this was measured even though the research article explains it below.

Thomas was also interested in contributing, so he participated as a non-dystonic horn player to the study later on. Which moved me and made me really happy hearing he did that!

Anyways! Here is the link to the research publication on NCBI. You will need a subscription to read it. I wish I could give a huge thank you to Aimee, Dr. Perlmutter and the rest of the research team. I know I'm not the only musician involved, but it meant a lot to finally participate. It makes me feel like I did something important to help further the efforts and information on the disorder somehow.

Although the photos below are unrelated, I wanted to add them here, since...why not!....there's already a photo of my brain above. Why not throw in a couple x-ray shots of my face since we're getting up close and personal. These are from my neuro-dentistry exams conducted in late 2014. Again, not the greatest quality because I took them on my phone. 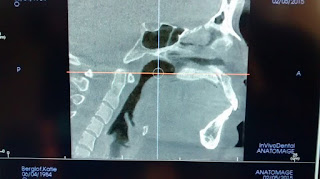 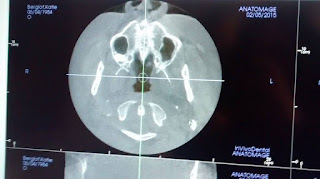 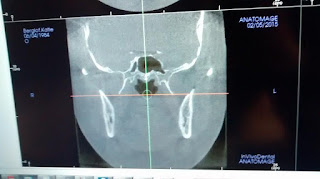 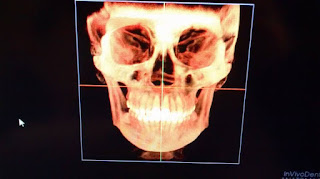