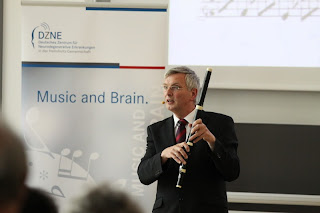 I really like this article (link above picture, can click on title), as it does a brief yet understandable outline of general treatments, and the references at the bottom are great. I'm a huge fan of Dr. Eckart Altenmuller's research and work. I'm always searching for his published articles. He's been researching musician's dystonia way before anyone knew practically anything about its existence.

I especially find the last paragraph over pedagogical and technical retraining, ergonomical modifications, and neuromuscular rehabilitation, to be inspiring, as it reinforces my positive thoughts on what I've been doing in my rehabilitation. I focus heavily on modifications and retraining as you have seen in my videos and writing. Though, I still have not given a single thought to even letting a needle come near my embouchure...meaning botox injections....No. Way.
Posted by Katie A. Bergløf No comments:

Email ThisBlogThis!Share to TwitterShare to FacebookShare to Pinterest
Labels: Embouchure Blogs or Articles, Links of Interest

Yep. Pretty much covers how I feel some days. haha! :-) 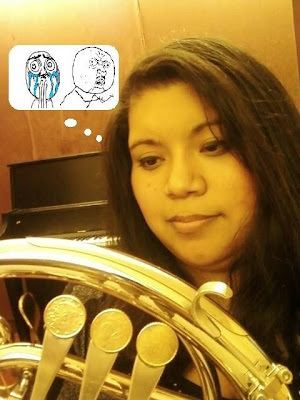 There's 4 more videos loading, but thought I'd publish the one that finished uploading.

This is actually the 5th video near the end of my practice session....and believe me, my endurance was running on empty by this time, but I was still testing out my larger interval motions and melodic passages to see what areas were most difficult. I wanted to post this one first since it's the only video I've recorded were all I do is play and don't speak. I was too focused on feeling things out.

*Note of caution: I don't usually ever play melodic stuff or etudes. It can be very tricky since I don't want to form old habits or make the tension in my face worse. I'm trying to rebuild a new pathway/way of playing with less tension. It is only now that I am able to test more melodic playing to see where the tension is when I try to play specific things. I do this every once in a while to see where things are from a broader view.. Anywhoo, this is not how or what I usually work on with my dystonic symptoms, but watching me play melodic pieces or passages can give a wider view of where the tension still effects me, that non-dystonic musician's might understand or see better, rather than me trying to explain it.

Other 4 videos are the same where I'm doing more melodic playing, but talk here and there. You can probably tell by watching, I'm not having troubles with involuntary contractions/sporadic spasms....
.
...Though you see a lot of facial movement going on due to tonguing, these movements do not feel dystonic...that's the best way I can describe it. Also even though there may seem to be a lot of facial movement it is less than what existed in the past too.
These facial movements do not hurt, nor do they feel out of my control but weirdly natural and relaxed. I feel like the facial movements are my muscles finally working together towards a similar task perhaps, but without the opposing (dystonic) muscle fighting back...so it feels natural. I also think partially why there's so much movement is due to lack of endurance...another very distinct separate feeling from dystonic-type feelings/movement.

The main issue that's most noticeable right now is regaining control/flexibility in that lower left lip. I've been trying to work out the tension there, but it feels limp or non-responsive more than tense, but slowly regaining mobility as you can tell it rolls in and out more often naturally on it's own, but still pretty tough to work with...stubborn! But at least it's not as frustrating to work with as working with relapse symptoms. I think that's the hardest obstacle to overcome is the glitch-like spasms and contractions that make it impossible to even hold a note or grab a note.

But since this was after a relapse/post-relapse where I have an extended period of less difficult time playing; you can tell how much better and at ease my playing is compared to the last video posted on July 31st where I was going through heavy relapse symptoms.


Posted by Katie A. Bergløf No comments: