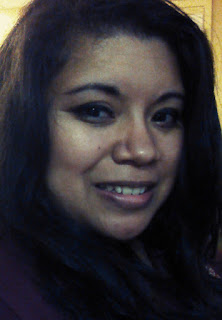 So far things have been going great, and I have a lot to say. Acupuncture has left me with some interesting experiences and observations!

The first meeting I had I played my horn for my acupuncturist, and (forgive me for forgetting the correct terminology) she said the type of movement in my face is sometimes referred to as windy or winding or wind. She also noticed how the right side of my face is more tense than my left. My muscles on the right side were especially tight around my jaw and pulling my lower lip muscle to the side. She said it's probably been effecting part of my playing too. I couldn't agree more! I explained how that lower lip was causing me a lot of problems, especially in my mid-to-low range my lip quivers or spasms, but had gotten better over time with re-training.

Anywhoo, the first session we did some cupping along my back. She said I must have a lot of tension in my right shoulder because it turned bright red almost immediately and it hurt. But after she was done it felt good! Then I had a light acupuncture session, had some facial massage, and a pain-relieving type of medication applied to my face. I was instructed that I am only allowed to play 15 minutes once a week, and to ice-pack/heat-pack afterwards, along with stretches and massage.

However, the rest of the following week after my first session I had the most intense pain in my face accompanied by a headache...even though the first session was light. It lasted a couple days and I had to massage my face a lot, put on the pain relief medicine along with heat-packing/ice-packing as instructed. I felt like there was a nerve on the inside of my cheeks pulsating. It wasn't TMJ either like some people think because I've had a dentist confirm that it is not the source of my problems.

When I went in the first time the slight dullness was there in my cheek (near the buccinator muscles) and in my upper lip. But after the session ended it had moved further back near my ear, and on the top of my cheek bone, but instead of feeling dullness, I felt a soreness that developed into that intense pain. I put the pictures below showing where the soreness and sometimes throbbing felt the most intense and how it moved to different areas after every session. The remaining sessions down the road where not nearly as painful, and I felt more like soreness accompanied by blood trying to flow through my face, yet some areas it felt good and the other areas it just felt sore. I found it interesting that after the pain receded, there was much improvement in the feeling of my face and gradual physical appearances/changes.

The black circles represent the specific points where I felt soreness or a blockage before or after the sessions.

Before session one: dullness in cheek area, upper lip, and a ton of tension the chin. 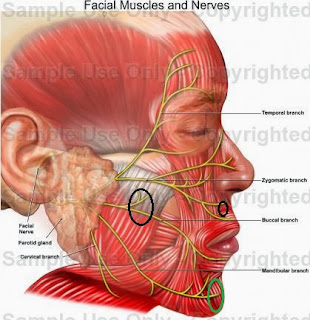 After session 1: Intense pain in the areas with the black circles, and a headache in the green area. Eventually all went away and the soreness remained in less areas as in the next after this one. 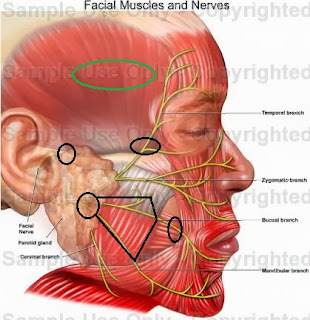 After session 2: Soreness moved to near front of ear and behind ear. 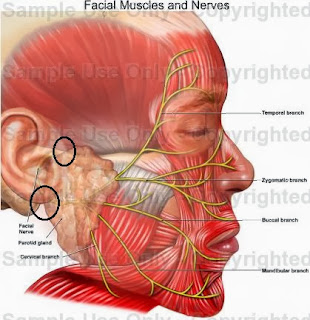 After session 3: Soreness moved to side of chin/jaw closest to chin, and chin area only.
3 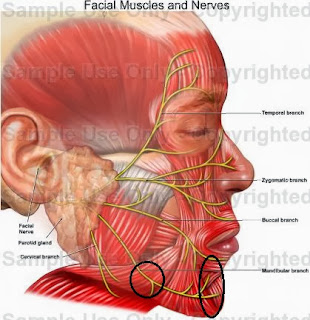 After session 4: Soreness moved to almost all of the right side of upper lip...especially near the base or bottom of the nose where the lip and nose meet, and also soreness along the lines that appear when you smile that run from the lip to the corners of the nose and along the nose.
4 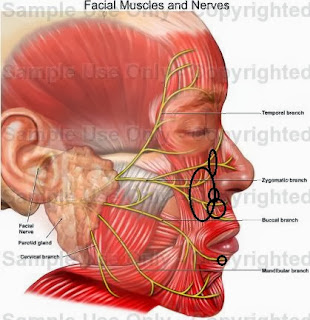 After session 5: This was interesting because during the session it was the first time we used the electric currents/stimulation on my face. Soreness afterwards primarily existed in the whole muscle area on the underside of my chin or jaw and ran all the way down the muscles on the front of my neck, and also along the left side/back side of my neck. There was slight soreness in the muscles on my forehead....but I didn't have a headache or anything. Then very slight soreness in the side of my cheek but this time a much smaller area and on-off again.
5 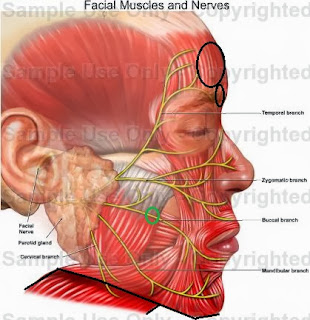 It was during this previous session that my acupuncturist also brought up the noticeable difference or position of my lower lip when I spoke. It looked less abnormal. She said it looked like my right side wasn't pulling that muscle back as much as it was before. I was shocked that she said this because this is one the things my family members and friends noticed about me in the past; that my lower lip was positioned abnormally when I spoke ...which I had at the time thought it was just due to aging. I told her that I too noticed a change in my chin area, and in my speech too. It was easier for my jaw to move, and I felt a letting-go of tension type of feeling going on in my face...but it's not all at once...it's as if the blood circulation is trying to break through all the channels and blockages, and some are opening up, and some still are resistant...and I think that's what's causing the soreness. There's areas of my face that feel like there's changes going on, like there is blood flow that wasn't as vital-life of a type of feeling as before.

Anywhoo, my next session is coming up this Tuesday on New Years Eve! I'm very excited!!! Despite other people worrying that any additional signs of pain to my face are not good, I can only say that the soreness has only been temporary, and I believe it is necessary when it comes to relieving tension. Sometimes relieving tension in the body is painful...I'm not saying it should be excruciating, but that I believe it is a vital step in the process of recovery, especially when after the soreness goes away, my face feels so much different and less tense than I have felt in a very long time. Even the symptoms of dystonia have lessened, and some symptoms act differently than they did before because the way my embouchure functions or the way the muscles function has changed.
Posted by Katie A. Bergløf

Email ThisBlogThis!Share to TwitterShare to FacebookShare to Pinterest
Labels: acupuncture